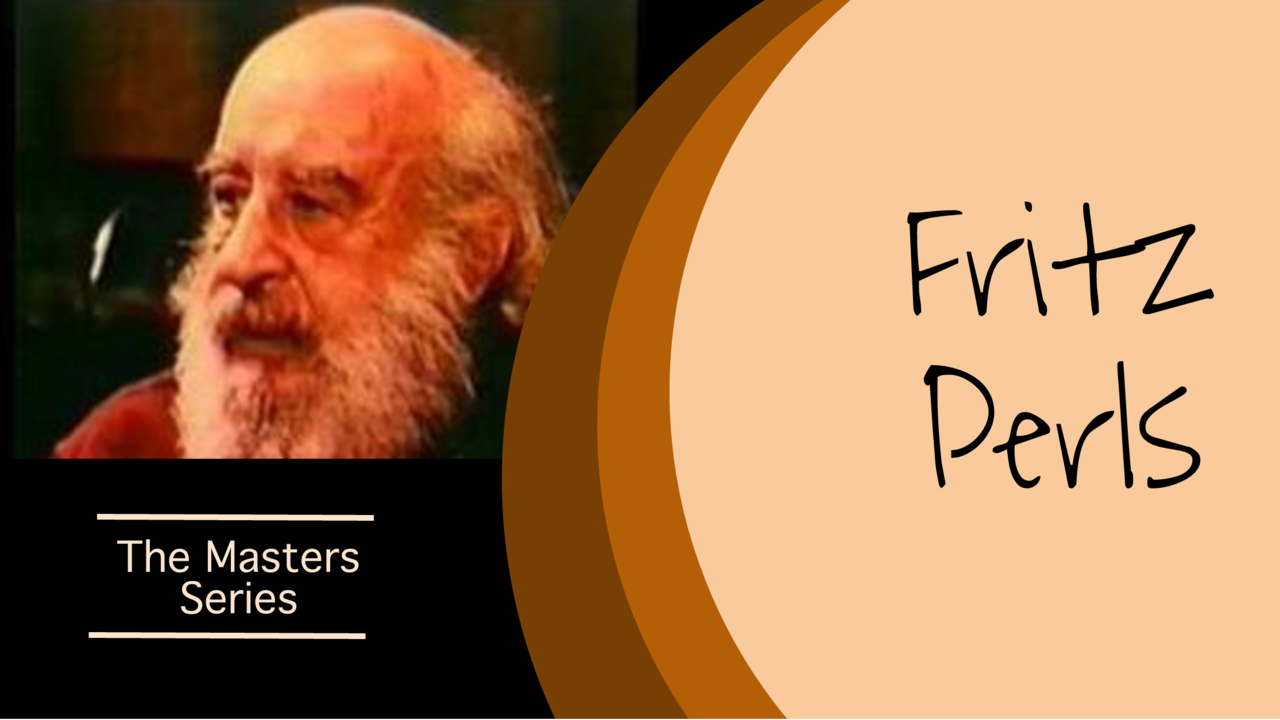 In this lengthy video Perls works with a number of volunteers in short segments designed to teach the frames and skills of Gestalt therapy.  Some of the pieces of change work are rapid, as we will see in the first segment while others are lengthier.  Although he works with the same students a number of times each piece stands on its own.  The full video is filled with therapeutic treasures, and I may focus on other demonstrations from the video in future posts.  However, for our purposes I will be focusing on the first segment, which lasts from :05 to 3:00.

The next consideration in terms of context is, similar to the Satir post, this piece was within a mixed dynamic of both training and encounter group.  Unlike most academic training, which focuses primarily on cognitive understanding and retention, this style of training invites students to embody the information in ways that create transformation.  In our hypnosis and NLP trainings we purposefully design exercises and experiences to achieve the same type of embodied understanding and transformation.

Understanding the context of these clips is important because all of these participants have been primed for the experience with Perls. They unconsciously, and often very consciously also, have an awareness of the type of experience they are about to have.  This means that they are aware of the particular rules and beliefs around behaviors that are expected and acceptable within this training situation.  It also means that Perls does not need to preframe the experience, unlike what we need to do with clients.

The final thought on context has to do with this article.  While there are any number of Gestalt therapists who will give a very Gestalt analysis of this piece, I am a hypnotist and coach speaking to people like me.  My breakdown is rooted in my experience and training and not that of a Gestalt therapist.

Coaching in the NOW

Gestalt therapy has an inherent flexibility built into it; the therapist has his or her theoretical frame work however is constantly responding to what the client is doing in the present moment. The therapist responds and decides the next step based on the information contained within the client’s response.  In terms of our 4 Quadrant framework this approach is externally framed and options based.

This ability to respond on the part of the therapist means that everything is happening in real time.  Perls says it in the outset that we must work in present moment.  We know that change can only happen in the present moment and that we must meet the client where they actually are, as opposed to where we think they are.  This is why I do not recommend to our students that they use scripts, or that they plan out their session based on a phone consultation, because the problem will have changed between the consultation and the first session. It’s our job to pace where the client is.

The session opens with Perls using the Problem State (P/S) as a springboard into change work. Given the quality of the footage it is not clear enough to see whether or not participants were nonverbally showing their unease, or if this was an accurate mind read by Perls.

Perls begins by asking his client how she experiences her stage fright.  While other therapists may have been tempted to analyze the stage fright, looking for deep reasons why the client had it, Perls is far more interested in how it was manifesting in the present moment.

States exist in the body, not solely in our minds.  Whether one is in a problem or pleasant state it is experienced by the body and is accompanied by shifts in conscious and unconscious behavior.  One of the key steps in the (H)NLP approach to coaching is to get in touch with the somatic experience of the state.

This does 3 key things:

The client responds to Fritz at the same level the question is being asked by talking about the sensations and behaviors in her hands. Given her unconscious communication, the change in breathing and slight laugh (1:00), it is unlikely she had conscious awareness of what her hands were doing until that point.  Fritz uses the conscious recognition of the behavior as a means of deconstructing the problem, or more accurately separating the client’s projections from her reality.  In this brief piece of change work two key projections are brought out, the client’s projections on Perls, and those on the viewers of the video.

The Role of Projections

Readers who are NLP practitioners and those who are fans of Gregory Bateson will recognize the presupposition of “the map is not the territory”.  Our internal map of the world is not the same as external reality.  Included in that map are our thoughts, beliefs, feelings, and rules or modals about the people we encounter.  We naturally then project that map onto the people and world around us. We even project the map onto problems.

Perls’ approach to change work is focused on clients recognizing their projections and changing them to something more resourceful.  He achieves this by first externalizing the projections and then having clients interact with them and give them voice.  This is similar to parts work in NLP and hypnosis.

It is not uncommon in videos of Perls that his clients express nervousness about him.  This pattern appears in demonstrations with other change workers in that period and is most likely the result of certain cultural norms in the mid 20th century, of which Perls would have been aware.  As the client becomes aware of her unconscious behavior, the tearing of paper, Perls asks if she could do that to him.  He is forcing her projection of him onto the paper and then having her consciously tear apart that projection.

The paper tearing is an opening gambit that will either use the behavior to tear apart the projection or will give more information about the problem.  In this case the latter occurs. The client becomes more aware of the unconscious framework of her problem.  After tearing the paper she voices her fear of Perls however her physiology has already begun shifting in a resourceful direction.  Her breathing becomes deeper and her voice tone is deeper.

Perls further helps the client dissociate from the P/S by having her put her imagined Perls on the chair in front of her.  Once again we hear her breathing shift into an elongated sigh, indicating a further move out of the problem state.

In the final interaction with projection one, Perls invites the client to voice her fears to that part.  By doing this she is placing her projection and the negative associated states not just outside of herself but also off Perls.  This is a key part of the change process as well as the flow of the rest of the class.  As long as she had her negative states anchored on to Fritz (or projected on him in Gestalt terminology) she would find the therapeutic process difficult because everything Perls did would have been experienced through the lens of her projection and state.

The second projection is more in line with the stage fright as it is mostly a fear of the audience, although it’s never vocalized.  Before Perls and the client work with projection 2 he invites her to unconsciously integrate projection 1 with projection 2.  He does this by having her express the same fear she had of her projection of Perls to the camera.  In voicing the same fear to 2 different contexts the unconscious implication is that they are the same.

Transforming and Integrating Both Projections

Once a projection (or) part is externalized the client is dissociated from the state and free to consider it from different vantage points including the point of view as the part.  From a dissociated position the client will automatically be more resourceful.

It is at this point that Perls invites the client to step into the role of the camera.  He invites her to physically change positions, remember spatial anchoring.  Because she is stepping out of her location as the experiencer she can leave that frightened part of her on the chair as she claims a new position and a new understanding.  And of course the quickest way to change states is to change physiology.

Next he asks her “what would the camera answer?”.  This automatically creates laughter in the client.  Unlike the nervous laugh she exhibited at the beginning this is lower and more relaxed, a resourceful state.  Any time you can get your clients to laugh you help them to release dopamine, which makes it easier for them to learn and form memories.  You are also giving the body time to let go of any pent up energy of which the client may not even be consciously aware.

Perls next elaborates on the suggestion by asking the client “if some words or some feeling as camera what would you say”.  When he asks this the client makes a non-verbal sound.  This, just as with the laughter right before, is her body/ the unconscious mind responding to the question.  The body speaks well before our language does. He then instructs her to verbalize it, “talk to that girl who was so frightened”.  Notice here the tense change.

Integration with Spontaneous Drop Through

The final part of this piece is fascinating because the client spontaneously drops through a number of states both as camera and in her original position.

The Drop Through technique is an (H)NLP pattern that invites clients to move through negative states.  The presupposition is that the client will end up in a positive state.

Below are the basic steps of the pattern.

In Perls’ demonstration the client does this spontaneously. First as the camera she says “I see you nervous, I see you unsure”.  Although she is speaking as the camera it is still her states she is speaking about.  After she says “unsure” she begins to say, “I see you..” she then hesitates.  This is the moment of conscious confusion, the threshold between the negative states and resourceful states.

Immediately after she continues, “I see you're ok”.  As she says this there is a noticeable shift in her tonality.  She is sounding far more resourceful.  When she moves back to her first seat she continues the drop through with “ I feel better.  I’m not so concerned.  I feel more at ease”. She is now in a positive state in the space she previously occupied when she was in the P/S.  This in itself is a collapse of spatial anchors.

Jess Marion is an (H)NLP trainer, hypnosis trainer, coach, and published author.  She is the co-founder of The Intelligent hypnotist and works with clients from around the world.

Stay connected with news and updates!

Join our mailing list to receive the latest news and updates from our team.Don't worry, your information will not be shared.

We hate SPAM. We will never sell your information, for any reason.