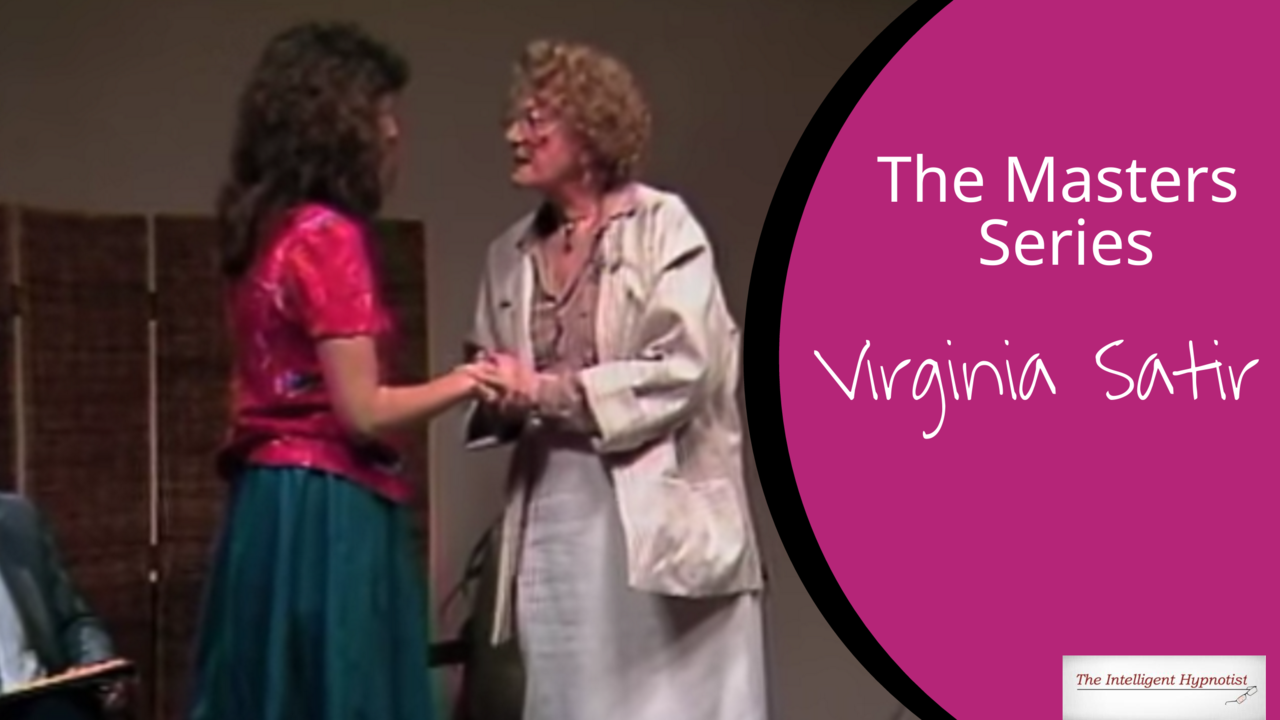 Over the next few months we will be exploring some of the works of hypnosis and change work masters.  We will present a piece of footage and then offer some analysis and thoughts on the process.  In this first installment we will be exploring a part of a demonstration from renowned family therapist, Virginia Satir.

The following short extract represents the start of a piece of change work from a class held by Virginia Satir. In this extract you will see Virginia take a problem, identify the parts of the problem, turn those parts into physical sensations and do a collapse.

Below you will find some comments on the work as it unfolds.

The piece begins with a student question (we will refer to the student as ‘client’ as this is the role she takes in the role-play). The question is excellent, how do you help a client to change when their sense of safety tells them it’s better to stay as they are than to risk the unknown.

“It is quite appalling to realize how catatonic the imagination can become when we hedge our bets, opt for the safer direction at every fork in the path” John Burdett.

In HNLP we often refer to this as the quarter inch of fear. Someone may withdraw from taking chances to avoid the risk of failure (or success!), and to remain ‘safe’ they stay ‘a quarter inch’ away from their perceived boundaries. However, as time goes by that perceived boundary begins to tighten, until they become locked into a situation despite desperately desiring change.

When A "Role Play" Is More Than Acting

Satir begins by treating the situation as a ‘role-play’, although it seems likely the client is working through some actual issue. From the perspective of a trainer, a role play is never really a role play. Inviting the volunteer to model the therapeutic exchange creates the space for the volunteer's unconscious mind to mirror those changes in the role player's own life. There are times when it is appropriate for a trainer to reinforce the suggestion that it is "just a role play" through the demonstration. Other times the reinforcement of the idea of the "role play" is done for the volunteer's conscious mind while the unconscious communication from the trainer is the opposite.

Finally as is shown in this clip, the line between role play and change work is deliberately blurred by Satir. You can see this beautifully demonstrated as the client approaches Satir.  She begins by pacing the client, "You're scared and I know you're scared".  This at the very least activates the problem enough to begin to make a change. Next Satir gives her a role playing name, "Irene" which is not used again.  Once into the process Satir uses the client's real name. This is an open invitation for the unconscious mind to engage as much or as little as the client is comfortable with during the process.

Next Satir uses a confusional langauge pattern "we are both at eye level and we're seated but in this instance we are standing".  On the surface this may sound like Satir is setting a scene however from the perspective of coach and client this does something very different.  When Satir paced the client initially the client's head nodded in agreement to the fear.  So there is fear plus any added pressure she might be feeling about being the demo subject which will activate her orienting response meaning she will be looking to an outside source on how to respond (open to hypnotic suggestion), in this case the trusted teacher, Virginia.  Satir's suggestion can thus create a small moment of conscious confusion.  In Attention Shifting Coaching we refer to this as the void.  The result of this is what Ericksonian hypnotists refer to as a psuedo orientation specifically in space and identity.

From this point on will be able to see and hear the client's unconscious responses prior to the conscious.  Further along you will also see that the role play has been completely blurred when Satir asks for the disagreeing part (1:27) and the client unconsicously gestures to her left side.  A few moments later when Satir asks how the client's body is feeling the client locates tension on the same side of her body (2:10).

We come from the school of thought that trance (and specifically hypnosis) can happen anytime there is a relationship in which the unconscious mind is actively engaged.  Throughout this demonstration the hypnotic relationship is fairly evident.  Speicifally though we would like to point out the "induction" in this video.  At 1:10 Satir reaches for the clients hand.  Instead of letting go she very naturally and conversationally integrates ambiguous touch and continues to hold it for a lengthy period of time.  Holding someone's hand in this way and not letting go gently violates social norms enough that trance tends to develop.  If you watch other videos of Satir she frequently utilizes this with clients.

One way of thinking about any problem is within the framework of a parts conflict.  Part of the client wants to stop feeling, doing, or being a certain way while part of them wants to continue in that way.  The classic example of this is a smoker who comes for hypnosis.  Part of them wants to give up the habit while another part of them wants to continue smoking.  If there wasn't a part that wanted to keep smoking then they would have already quit easily.  If there is no parts conflict then there is no problem.  For example if the same smoker enjoyed smoking and was completely congruent with it they would not be in our office because it's not a problem for them.  On rare occassions people will call up saying they want to quit because other people said they should.  In these cases more often than not the prospective client is congruent with their habit, and the smoking is a problem for the other people but not the client.

We can think of change work as being a collapse of the conflicting parts in such a way that the client has achieved the desired outcome.  There are any number of ways to reconcile or collapse the parts. A typical NLP approach might be a ‘visual squash’. As we continue on we will explore how Satir begins to collapse the parts.

Virginia begins by showing her intention to move away from the description of the problem in words, and move into feelings; “So much that can’t be said by words”. We will talk more about this a bit later.

Interestingly it is the client who first refers to “a part of me that disagrees” (Virginia has referred to it as “anything”). Satir tries a simple verbal collapse, “if you could find a way to get something that you wanted and felt it was safe to do so, would you go after it?” [1:42]

Satir asks the client, “How do you feel right this minute with me?” Presumably hoping for the client to say “safe” rather than the response she gets “good”! [1:51].

Satir then validates and models the feeling of being afraid. Modeling the part “watch out, be careful” in a tone that mimics perhaps what the client’s inner voice may be like [2:05], Satir then asks how the client's body is feeling, moving her attention into her body.  The client then confirms the modeled voice was similar enough to create a negative kinesthetic response.

From the HNLP perspective this was a foundational question.  States, whether positive or negative, must be embodied in the present moment in order to make the change.  The body in many ways is an extention of the unconscious and the more you bring your client's attention to what's happening in the body the more you bring them into the present moment where lasting change can happen.

Satir then moves into a unconscious process instruction, beginning with a ‘mind read’,  “I know at this moment there’s a piece/peace of you inside that would like to change”, while building rapport with that part, then checking on the sensation, “What’s happening to your back as you do that?”  The client responds that it's feeling better, a sign that rapport has been established with the part and change is beginning to take place.

Next Satir linguistically slips by the client's conscious mind by stating, "I want you to know something about me".  The client expects her to share some people of information about herself directly after that statement.  Virginia does not.  She continues on with "change goes on all the time". This creates a conscious prediction error allowing the suggestion to settle.

This suggestion is followed by the deepening of unconscious rapport, "I don't want to force anything".  Remember Satir referred to the problem part as "anything" earlier in the clip.  She is speaking directly to that part.

Next Satir moves into an implied regression, “Because of what you learned as a little child…”, embedded commands “Open up to you”.

Finally there is an ambiguous collapse “…Join together to see what could happen …?” [2:57]. While the client's conscious mind may be tempted to think that Satir was referring to the 2 of them, unconsciously the suggestion is the integration/ collapse of the parts.  In that moment Satir was stepping into the role of that part.  If this had been a full change work piece it would not be surprising if Satir continued in the position of the problem part or other participants were invited into a "parts party".

Even though this clip is short it shows Virginia’s mastery of hypnotic process. While Satir may have been consciously aware of some of what she was doing, as a masterful change worker much of it may have been in the realm of unconscious competance.  Therefore feel free to watch the clip again and make new and different discoveries!

Stay connected with news and updates!

Join our mailing list to receive the latest news and updates from our team.Don't worry, your information will not be shared.

We hate SPAM. We will never sell your information, for any reason.